The HiLeS formalism is used to generate a pivot model from which the specific HDL Virtual Prototype model can be generated. To generate the pivot model we defined a HiLeS metamodel, which incorporates the elements of the HiLeS formalism. As part of the work in the HiLeS Framework, the HiLeS metamodel incorporated additional metaconcepts and modified some of the attributes derived form the HiLeS Formalisml in order to facilitate the representation of some of the architecture and behavior constructs of SysML. Models based on the HiLeS metamodel can be transformed to models in the HDL and in the Timed Petri Net domain.

Figure 1 presents the HiLeS metamodel. It contains the base concepts form the HiLeS formalism: Architecture, Structural and Functional block and the HiLeS Control Net elements (places, transitions and arcs). The Payload and Point (ports and services) metaconcepts have an additional size attribute that allows the creation of vectors. We have also specialized the Payload to allow easier identification of the payload type. There is a new Decision block, that is used to represent Decision Nodes form SysML Activity Diagrams. Detailed explanation of the metamodel can be found in the HiLeS Technical Manual. 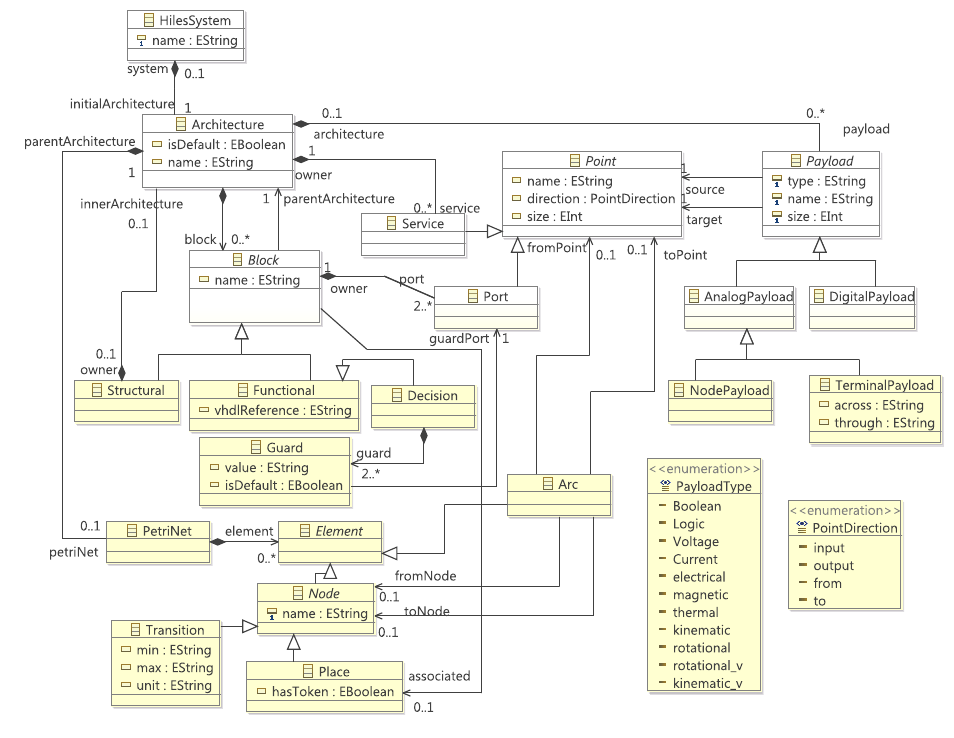 A personalized EMF Tree editor is provided to allow visualization of the generated HiLeS Model. Although the editor also supports model creation and edition this is not its intended use.

A model validation command is available to validate the HileS Model. Since the HiLeS model is generated, errors detected in the HiLeS model require that the SysML model is revised and the HiLeS model regenerated. Transformation from HiLeS to other domains should not be executed untill all errors have been fixed.

A Petri Net extraction command is available to extract the Petri Net information form the HiLeS Model. The Petri Net is saved as a model that can be later used to generate textual Petri Net representations that are compatible with third party Petri Net validation tools.

A TINA textual representation generation command is available to generate a textual representation, in .net format (Compatible with TINA), of the Petri Net model. The TINA tool is integrated in to the HiLeS2 Framework IDE making it possible to execute syntax, structure and reachability commands form within the IDE. Additionally there is an option to open the Petri Net with the TINA nd editor (An editor for graphically or textually described Petri nets, Time Petri net and Automata. Interfaced with TINA analysis tools and drawing facilities).